A series that goes behind the scenes of local TV 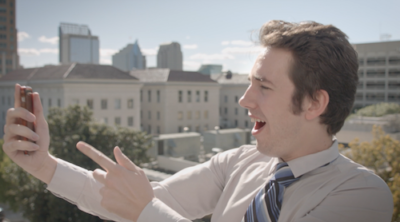 THE STORY AND THE CHARACTERS

Breaking News goes behind the scenes at WAAB, a local television newsroom in a medium sized market.

Paul is a producer who has high morals and cares a lot about journalism, but he finds his ideas to do real stories are being shut down by his boss, Dan.

Dan is the news director and believes in the motto, “if it bleeds, it leads.” Dan has built a reputation for improving the ratings at his station at any cost, even if it means changing the names of his talent.

No newsroom is complete without a reporter. That’s where Steve comes in. He’s charismatic, but he doesn’t care about news. He’s in the industry, as he says, “to pick up chicks.” Let’s see how that actually works out.

Sarah is the anchor. She’s pretty gullible and would probably read anything that goes in the teleprompter.

Then, there’s Rob. He’s an alcoholic and regularly drinks the cheapest beer he can find while working. Why he hasn’t been fired yet is anyone’s guess.

The story begins on an average day with a flub on the air that gets Paul in trouble with the boss. So, Dan gives Paul one last chance to prove himself. Paul is going on a ridiculous sweeps assignment with Steve to get the station out of last place.

Along with seven years in the news business, Ryan is a professional voiceover artist and standup comic. Although he focuses on film and voiceover now, you can still occasionally catch a set in Sacramento.

Corinne has dedicated her life to acting and singing and has performed throughout the United States and Eastern Europe as a vocalist. She is the writer and director of the documentary "Ed Runs into the Sunset," has appeared as an actor in independent and short films, and lives in El Dorado County with her family.

Mukesh Patel is a talented actor known for his intense and natural on-screen and stage presence. He appeared in the play "The Indian Wants the Bronx" and the film "Hardland." Mukesh was raised and educated in Leicester, England, studied drama at the NW Theater School before coming to Sacramento.

Josh started his life out as a comedian at the ripe age of 17; he wasn't even allowed in the bars where he performed. After switching over to acting, he studied theater and film for two years to become a hidden gem in the film community.

Ryan is an award winning filmmaker and an actor who is adapting to the ever demanding changes of the career. His credits include principal and supporting roles in films and regional theater. He's also a goofy dad and husband.

Stephanie has provided makeup services and special effects for films all over California for three years. She feels makeup has a story to tell and defines each character. She specializes in airbrushing, scar and tattoo cover up and special effects.

Mark is a seasoned, professional actor with more than 20 years of performing experience in stage and film. In 2008, after formal theatrical training and gaining SAG status, Mark moved to Sacramento where he continues to work in front of and behind the camera.

Aryn is a filmmaker and game developer in Northern California.  She's always had a passion for gaming, so she took classes in order to give video game characters a voice. In her spare time she works with the charity organization, League of Heroes, Inspired, and plays Overwatch on her awesome PC.

Xang is an award winning filmmaker based out of Sacramento. He's a senior at the Art Institute of Sacramento with an emphasis in Digital Filmmaking and Video Production. He discovered his passion for filmmaking in junior high when he took his first video production class. It ignited a creative interest that would lead him to pursue filmmaking as a career.

Michael is a photographer, graphic designer, and traditional artist. He has 18 years of experience with raster graphics. In his free time, he walks around Las Vegas with his tripod and camera developing his portfolio.

Howard Jackson has been making people laugh in Northern California for the last two years. He's performed on stage in the Sacramento area, and now he's branching out to films produced in the region.

Manuel Crosby is a filmmaker and cinematographer from Northern California. Growing up in a small town, he created many epic miniDV blockbusters in backyards with his best friends. More recently, he has shot a wide range of projects ranging from short to feature length.

David Shapiro is an actor and podcaster in northern California. His first lead role was in the web series Troll Freak (2013). He's from northern Illinois and moved to California with his college sweetheart. She is David's biggest supporter. Together, they have two pugs.

Before jumping into the film scene, Charlie Robbins worked in the outdoor adventure industry. Once she started river guiding, biking, climbing and traveling, she fell in love with video kayaking. Now, she's taking it to the next level in film.

Samantha Laurenti is a Sacramento filmmaker and actress. She was a script supervisor for the feature film "Not Your Year" and recently won a Director's Choice Award for her film "What If Monkeys Could Talk?" She's excited to be a part of the Breaking News team.

Cody is a writer, director and cinematographer from rural California. He specializes in visual storytelling with emphasis on cinematography and lighting. When not directing his own films, he can usually be found in the electric department, shooting or gaffing.

Rose is an award-winning independent filmmaker whose passion is bringing creative ideas to fruition. She earned her Bachelor of Science degree in digital filmmaking and video production from the Art Institute of California – Sacramento. She has produced several short films screened at a variety of festivals.

David has a great passion for acting and supporting film. He's quickly making himself known in the Sacramento film scene with appearances in movies like Streets. He's also an associate producer for Thursday the 12th. He's excited to join the Breaking News production team.

David is a film composer and writer. In 2016 he became the youngest person to fly a trike – a motorized hang glider – across America. The flight was made as part of a documentary film; he is currently at work on a memoir about the experience.

Donate to the show

The money you donate will pay for marketing and TV festival submissions. Any donation is appreciated.

We’ve written a pilot and a treatment that outlines episodes through Season 2. Our goal now is to get this show in front of distributors, networks, or streaming websites.

OTHER WAYS YOU CAN HELP

Look, we get it. Some of you can’t contribute money, but you can help us in other ways.